Goodness knows there are too many remakes, reboots, and re-imaginings these days. At least Child's Play contains a technological spin that wouldn't have been possible in the 1988 original. Chucky, the murderous doll, is now a smart-device capable of controlling appliances, adaptive learning, and other functions. We didn't need a new version of Child's Play, but if we must have one, this twist at least offers a contemporary feel.

Aubrey Plaza plays Karen, the single mother to 13-year-old Andy (Gabriel Bateman). He's having trouble making friends, so she buys him one of the “Buddi” dolls that are all the rage. Chucky (voiced by Mark Hamill) is at first a good – if not entirely real – pal. Eventually Andy meets some other kids, who introduce Chucky to the joys of swearing and bloody horror movies. He begins learning all the wrong things, then puts this knowledge to use when Karen's obnoxious boyfriend lays into Andy. Things go downhill from there. Cop neighbor Mike (Brian Tyree Henry) finds himself in the middle of the mayhem.

Child's Play had the potential to say something valid about the way our devices now connect to each other and the potential dangers of that. It completely bypasses the opportunity in favor of fast-paced thrills. And, really, that's fine. Who goes to a movie like this for something thought-provoking anyway?

I'm a fan of big, over-the-top '80s horror movies like The Return of the Living Dead and The Texas Chainsaw Massacre Part 2 (which, coincidentally, Chucky watches). These are films that go for broke trying to make audiences squirm at gruesome violence and laugh at dark humor, often in the same beat. Child's Play is very much in that tradition. Director Lars Klevberg knows the material has inherent silliness, so he embraces that quality while still delivering grade-A Chucky kills.

If you can get on this particular wavelength, there's a sufficient amount of fun here. Purists looking for a straight remake of Tom Holland's original may be disappointed. (The high-tech redesign of Chucky is another potential turn-off for those folks.) Anyone willing to go with the vibe of Child's Play will be treated to some utterly entertaining madness, especially in the last fifteen minutes, where Chucky lets loose in a department store. The finale is sick and strangely funny in spots.

Aubrey Plaza seems like an unusual choice to star. She's known primarily for work in comedies. Presumably, her appearance is designed to clue us in to the fact that the story is told with a winking aspect. The actress is terrific, although Karen is somewhat flatly written. Gabriel Bateman makes a strong Andy, but the real star is Mark Hamill. He creates a disturbing kid-like voice for Chucky, then gradually adds menace to it. With his vocal prowess, the character comes alive.

The litmus test for any remake/reboot is this: If it was an original, would it make the same kind of impact? In the case of Child's Play, the answer, honestly, is no. The original hit like a bomb in '88 because the concept was so dementedly fresh. It's doubtful that this new version will inspire six sequels like that one did. The Chucky franchise grew more outrageously comedic as it went on. If nothing else, the 2019 Child's Play straddles the line between comedy and horror in a manner that's true to the series as a whole.

In other words, what we have here is a weird, violent, goofball fright flick. If that's your bag – and it's certainly mine – Chucky's return is worth ninety minutes of your time.

Child's Play is rated R for bloody horror violence, and language throughout. The running time is 1 hour and 30 minutes. 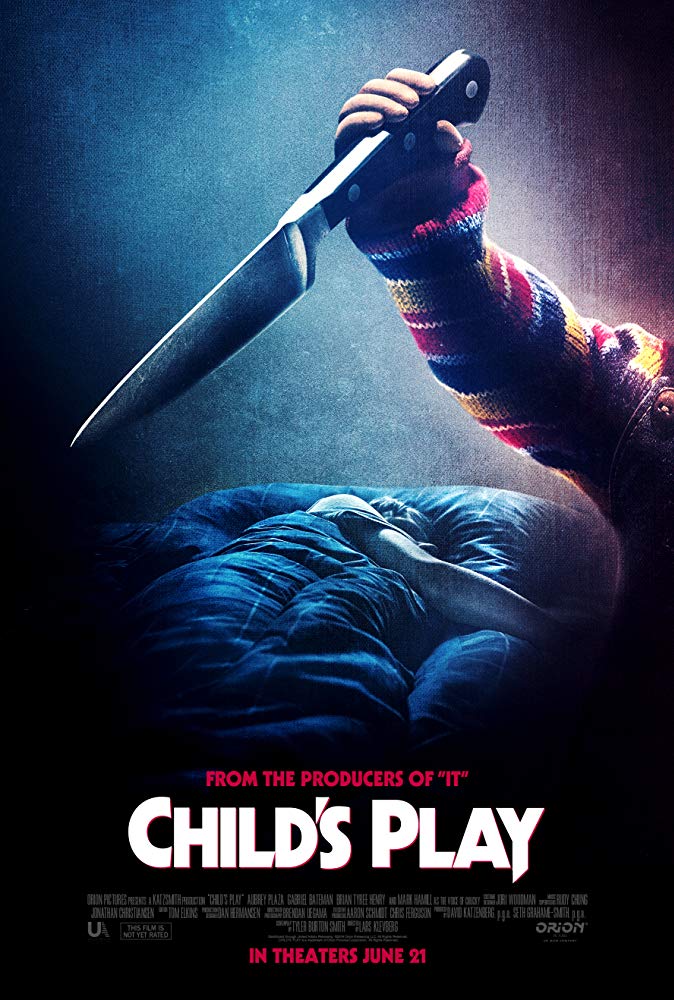 The Aisle Seat critic, Mike McGranaghan, is a member of the Online Film Critics Society and the Broadcast Film Critics Association.