The Lost City is an example of how important casting is. The story is dumb – another retread of Romancing the Stone in which two people who don't initially get along start to fall for each other after enduing a jungle-based adventure. Despite that, the main actors have come to play and, more importantly, are given the room to have fun with their characters. The two leads have particularly good chemistry together, which also helps. No matter how preposterous the plot gets – and it gets very preposterous – watching the stars bounce off each other offers sufficient pleasure.

Loretta Sage (Sandra Bullock) is a best-selling romance novelist whose creative well has run dry. At the behest of her pushy publicist Beth (Da'Vine Joy Randolph), she reluctantly agrees to take part in a promotional event for her latest book, “The Lost City of D.” Also in attendance is Alan Caprison (Channing Tatum), the Fabio-like cover model who has appeared on the front of every entry in the series. Alan takes the role a little too seriously, believing himself to be the embodiment of Dash McMahon, the hero of her stories.

After the event, Loretta is kidnapped by eccentric billionaire Abigail Fairfax (Daniel Radcliffe). He knows her newest novel was inspired by a real lost city that supposedly contains a hidden treasure, and demands that she help him locate it. Meanwhile, Alan – intent on proving he's more than just a pretty-boy model – hires former Navy SEAL Jack Trainer (Brad Pitt) to help him launch a rescue mission. Jack only ends up being useful to a point, after which Alan and Loretta are forced to traverse the jungle and all its incipient hazards by themselves, as Fairfax's goons give chase.

There's nothing interesting about the search for the city or its treasure. The Lost City doesn't go in depth about those things anyway. The concept is mostly just a launching pad for Loretta and Alan to have adventures and fall in love. Bullock and Tatum's comedic sensibilities mesh together well. She once again plays a humorously uptight character, whereas he's a well-intentioned goofball. Some of the dialogue between them sounds like it might have been improvised. There's a natural off-the-cuff quality to it that feels genuine. A romantic spark ignites between the two, as well. That pays off nicely in the later scenes, especially when Alan makes a revelation that causes Loretta to see her work, and him, in a different light.

Here's a good example of how the stars elevate the material. At one point, Loretta and Alan have to cross a river. When they get to the other side, it's revealed that his backside is covered in leeches. The only way to get them off is for him to drop his pants and have her remove them. That scene could have been really cheap, except that Bullock and Tatum expertly play up the vulnerability of it. Alan unexpectedly panics, to the point where he's not even self-conscious about being naked in front of her. Loretta has to face the fact that she's with a naked man for the first time since her husband died. She has a contradictory sensation of being a little thrilled by it, but also feeling a little awkward. By going for the human comedy rather than the easy gags, the actors lift up the screenplay's machinations.

Appealing supporting players contribute nice touches. Radcliffe has a field day portraying the weirdo Fairfax. He gives the character an amusingly narcissistic personality, as though he gets off on his own malice. Although Pitt's role is small, he does a lot with it, making Jack the kind of uber-capable, confident he-man that Alan wishes he could be. (Watching Alan become subservient to Jack is hysterical.) The Office's Oscar Nunez is here, too, playing a kooky pilot Beth hires to help her find Loretta. Directors Aaron and Adam Nee keep the pace moving, while giving everyone a chance to explore their characters' quirks.

Again, the formal plot is dumb, dumb, dumb. The Lost City still works as an all-star romantic-comedy adventure, thanks to the energy of the actors. It's got plenty of laughs and the Loretta/Alan relationship proves kind of sweet. The movie is smart enough to keep the focus on the people rather than the mayhem. That makes all the difference in the world.

The Lost City is rated PG-13 for violence and some bloody images, suggestive material, partial nudity and language. The running time is 1 hour and 52 minutes. 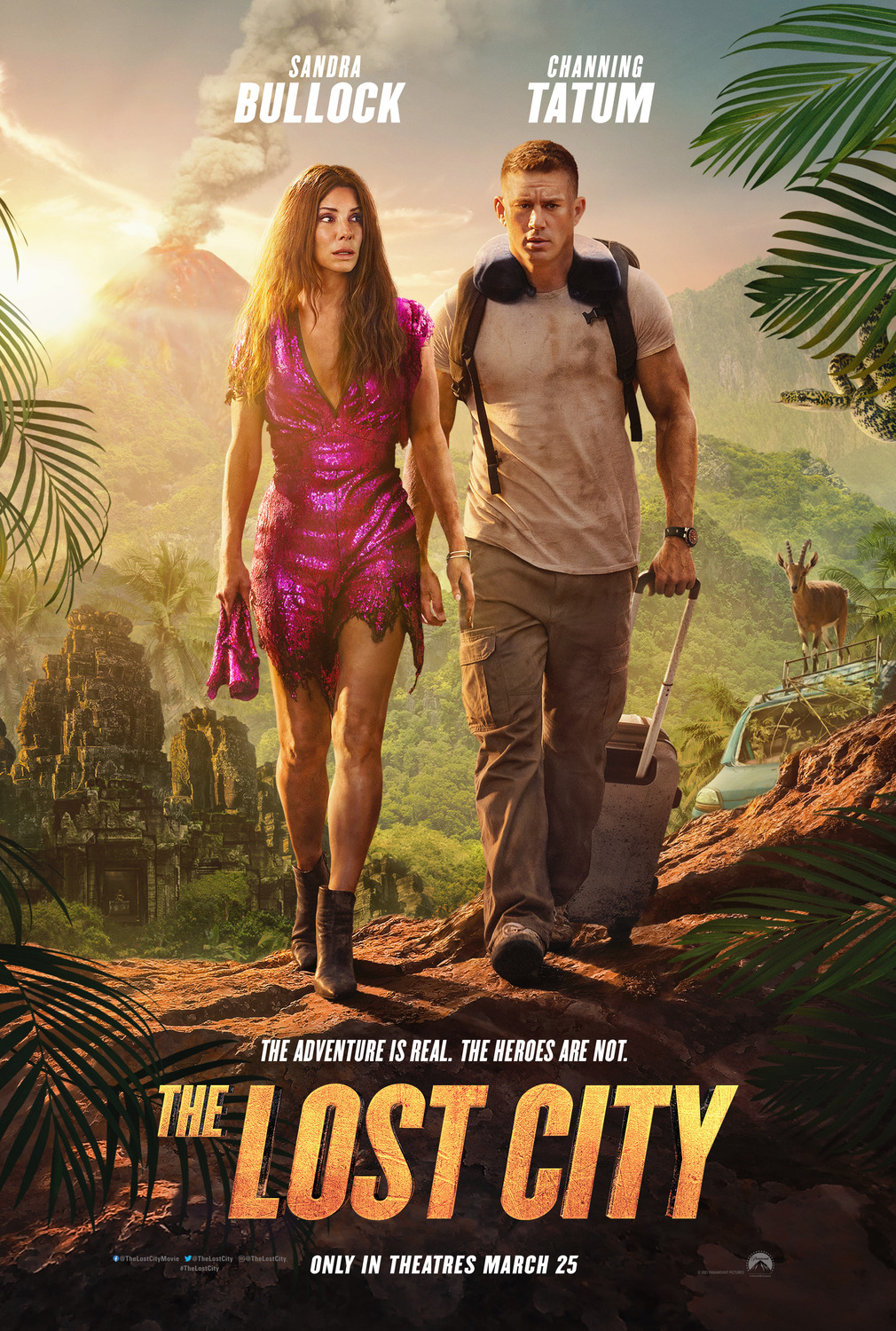