Movies about revenge can be effective, but they can also feel repetitive. There are only so many reasons why one person might want revenge against another, and only so many ways in which it can be achieved. That's what makes Riders of Justice so alluring. It's not about the revenge as much as about the build-up to the revenge – the decision to pursue it, the preparations, and, most importantly, the feelings of ambivalence that it drudges up. I haven't seen a revenge picture quite like this before.

Mads Mikkelsen stars as Markus, a soldier who is scheduled to have his deployment extended. When his wife Emma (Anne Birgitte Lind) is killed in a train accident, he returns home to care for his teenage daughter, Mathilde (Andrea Heick Gadeberg). She wants professional help to grieve; he refuses to allow it, instead trying to get her to suck up her feelings just as he's sucking up his. Then something unexpected happens. Markus gets a visit from Otto (Nikolaj Lie Kaas), a mathematician who was on the crowded train with Emma and offered her his seat. Otto, a man obsessed with probabilities, believes the wreck was no accident. He's sure a criminal gang called the Riders of Justice orchestrated it to kill someone else on board.

Markus initially thinks this is nonsense. Otto and his two equally-geeky colleagues, Lennart (Lars Brygmann) and Emmenthaler (Nicolas Bro), finally convince him otherwise. At that point, the trio makes the decision to get revenge against the gang's leader. Mathilde starts questioning why these strange guys are hanging around the barn out back, so they pretend to be the professional therapists she's been wanting. Mathilde's shy boyfriend and another character's sex slave also factor in to the plot, but I'll let you learn how on your own.

Riders of Justice focuses on what happens when Markus and his new allies begin the process of seeking vengeance. They first visit the leader's brother, a confrontation that quickly turns from a failure to a catastrophe as the ugly realities of violence become crystal clear. Markus is used to violence, whereas the others are not. Darkly comic bickering about the implications of what they're doing comes frequently. The men also grapple with the issue of where lines should be drawn. What's fitting? What's too far?

Moments of actual violence are few and far between. Writer/director Anders Thomas Jensen is more interested in exploring how different personality types respond to it. Markus is, to a degree, desensitized due to his time in the military. Otto and friends aren't. They encourage the plan initially, yet would never carry it out on their own. They need the intense, angry Markus to kick things into gear. Similarly, Markus carries a burden. If he didn't know his wife was collateral damage in a sinister plan, he could have repressed his feelings and marched forward. In other words, Riders of Justice demonstrates the oil-and-water dynamic that creates a situation perpetually in danger of spinning out of control.

There's an undercurrent of humor in the film, with Otto, Lennert, and Emmenthaler pretending to be therapists while actually saying/doing things to help Markus and Mathilde strengthen their relationship. They unintentionally get him to express his feelings (even if occasionally murderous) and validate hers. At the same time, Markus teaches them how to stand up for themselves. It's one more way the movie subverts the entire revenge movie formula.

Powered by Mads Mikkelsen's intense performance, Riders of Justice is a wildly entertaining examination of the psychological desire to get even, and where it can lead for better or worse.

Riders of Justice is unrated, but contains strong violence and language. The running time is 1 hour and 52 minutes. 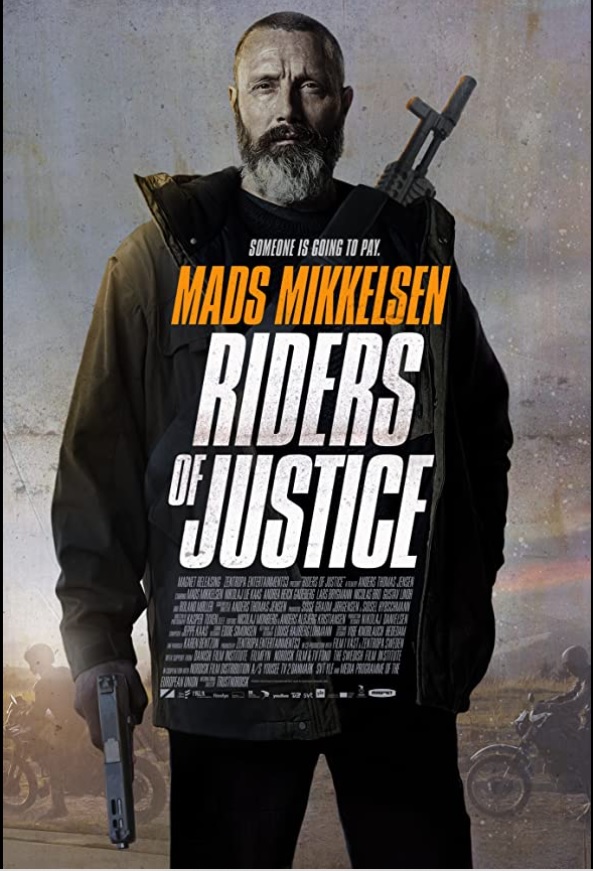