Standing Up, Falling Down

Sometimes good performances can invigorate a cliched plot. And boy, does Standing Up, Falling Down ever have a cliched plot. Yes, this is another indie movie about a disaffected thirtysomething who moves back home to figure out their life and try to resolve matters with “the one who got away.” How many times have we seen that? Dozens? Hundreds? Regardless, it actually kind of works here, thanks to the efforts of the two main stars.

Ben Schwartz plays Scott, a stand-up comedian whose career once seemed like it was really on the verge of taking off, only to crash and burn. He's now reduced to doing gigs like open mic nights. Scott moves back home with his parents (Kevin Dunn and Debra Monk) and younger sister Megan (Grace Gummer). He immediately starts asking people about Becky (Eloise Mumford), the love of his life who he walked away from in order to pursue his comedy dreams. She's now married to someone else, of course, which only adds to his disillusionment.

After a chance encounter in a bar, Scott befriends Marty (Billy Crystal), a wise-cracking dermatologist dealing with his own life disappointments. He's a widower whose adult son Adam (Nate Corddry) refuses to have anything to do with him. Marty and Scott commiserate, grow close, and spur each other to heal. But you probably already knew that.

Although there's not a beat in Standing Up, Falling Down that you won't see coming, the movie is hard to resist. The screenplay by Peter Hoare is a little sharper than you normally get with this general plot. There are moments of real substance – not just the usual mumblecore posturing – particularly when it comes to the many regrets Marty has in life and the way he chooses to deal with them. Similarly, Scott has the big third-act epiphany we know is coming, yet the film wisely chooses to have him arrive at it with a degree of subtlety, rather than via a big speech or grandstanding moment. Dialogue, meanwhile, is often very funny, with the characters trading wisecracks that elicit laughs.

The great appeal of the two leads pushes the whole thing over the goal line. Ben Schwartz has a naturally likable quality. He avoids the mopiness usually found in the protagonists of these indies, instead giving Scott a humorously bemused perspective on his own life, almost as if he knows it's going to make great fodder for an eventual stand-up routine. The character never gets on our nerves and, through Schwartz's terrific performance, we actively root for him to figure himself out.

Billy Crystal is also phenomenal. Early scenes find him in a familiar mode, cracking jokes and making quips. As the story progresses, though, we learn more about Marty's heartbreak. Crystal has always melded comedy and pathos in his films – think back on City Slickers and When Harry Met Sally... – but this time he's playing someone far more emotionally damaged than Mitch Robbins or Harry Burns. Without ever tipping over into the realm of being maudlin, the actor conveys the deep pain inside Marty, as well as the self-destructive behavior he indulges in to push that pain away. This easily ranks among Crystal's best on-screen work.

Standing Up, Falling Down may not score many points for originality, yet it takes an overused formula and spruces it up to strong effect. This is a funny and touching picture about how laughter can hide anguish, and how finding an empathetic friend can be the springboard to healing that anguish.

Standing Up, Falling Down is unrated, but contains adult language, drug content, and some sexuality. The running time is 1 hour and 31 minutes. 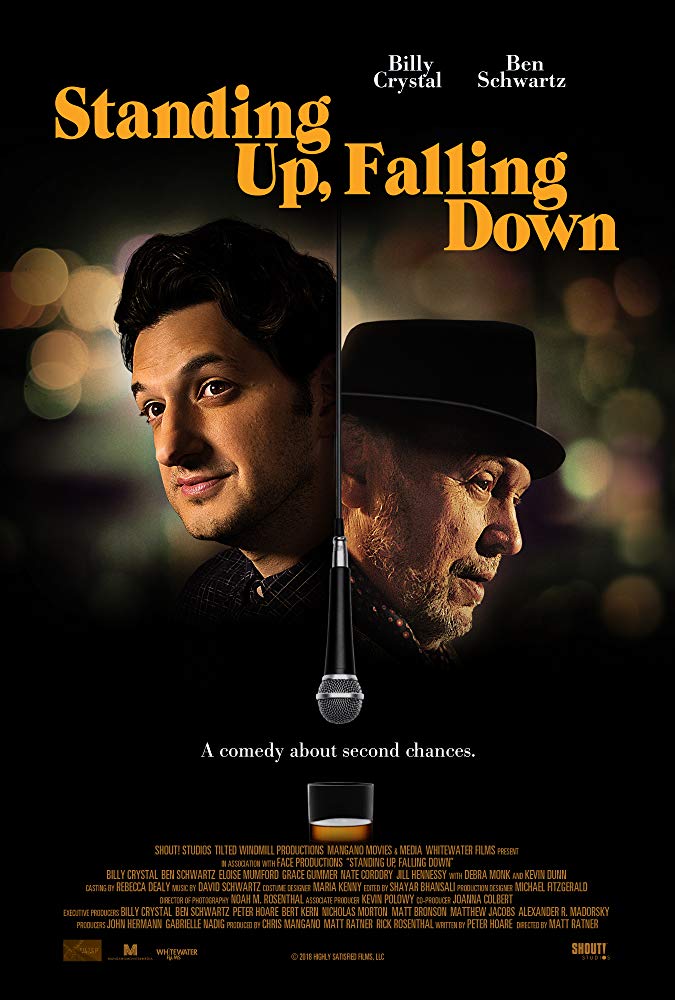